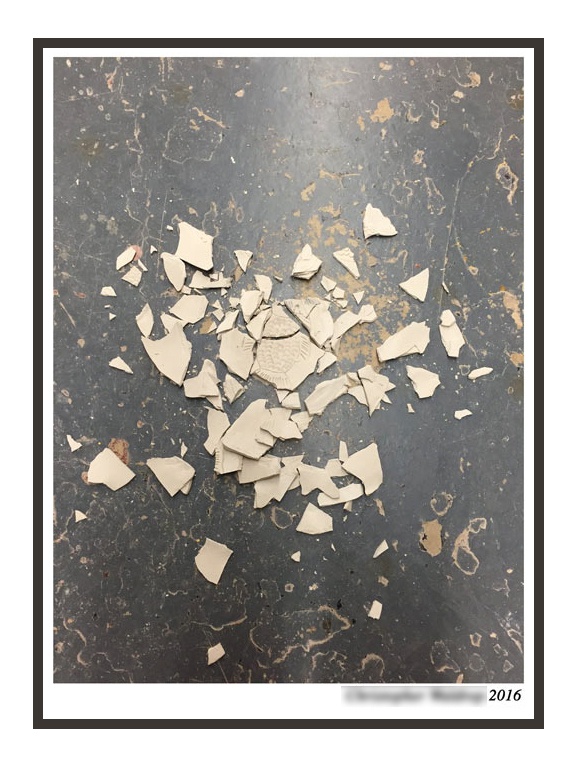 Abstract art – what does it mean to you?

A couple of posts ago, I wrote about the madness of art. At the end of the post, I showed a photograph (see below) of some art that I really liked when I saw it on the website of a fellow writer.

Is this abstract art?

To me it is. From what little I know of its creation, it wasn’t intended to be a piece of abstract art but in my eyes, it ended up that way.

The origin of this work was in three dimensions. It was, as I am sure some people will see, a piece of pottery. You can read about it here on the website of the creator. (Not God :-))

The creator in this case was writer, Christoper Waldrop of Free Thinkers Anonymous whose quirky work I adore.

I first read about Christopher’s early dabblings with ceramics here in this very entertaining blog post about the eccentric sounding aunt who introduced him to clay.

When I saw his later post about the making of a ceramic bowl from small fish fashioned out of clay, I was intrigued to see the finished product and was looking forward to seeing pictures when it was done.

How did this bowl become a piece of abstract art?

I have no idea. I only know when the big reveal came in this blog post, it was a shock to see the ‘finished piece’.

How did the bowl go from this? (above left.) To this? (Above right.)

We may never know how it happened.

Was it dropped accidentally? Did someone catch it with their hand and knock it off the table? Did the maker get cross with his work and smash it deliberately?

All I know is, when I scrolled down the post to see the finished bowl, I was momentarily shocked and disappointed. But then, something happened in my head.

I adjusted my brain to move on from what I was expecting to see to what I was actually seeing and…I liked the image created by the accident (or the deliberate – whatever).

It first occurred to me that all the pieces couldn’t possibly be there. Were they out of shot. Did the bowl explode and scatter itself far and wide?

To me, good abstract art raises more questions that it answers.

I was intrigued by the unexpected abstract art that Christopher had created and, with my reaction to it. So I decided to print the image and show other people to get their reactions.

I  asked people  things like – Do you like this image? What do you think it is? Do you think this is art? Would you hang it on your wall?

Here are the results…

“Well…(long pause while gazing intently at the image), I think it looks quite interesting. Looks like someone made it on a computer.”

Alexander: “Yes!” (Nodding enthusiastically.) He pauses and turns to me saying, “But you will need to frame it first.”

Me: “What do you think of this picture?”

Me: What do you think it is?

Henry: Emphatically…”Yes! I think the person did a picture of what it might look like and then they ironed it to make it flat. Then they painted it and printed it.”

“A smashed plate? Looks a bit like a broken papadum. It’s a photograph of something that is broken.

“I saw a fish straight away – the background looks like the ocean.”

Me: “Would you call this art?”

CO: “Yes – I would put it somewhere like the bathroom (laughs), you know, somewhere where you can really look at it for ages.” (She’s a mum – that’s where she hides.)

“You can see light coming down. I think it is something smashed – oh, I see the fish too. It reminds me of sand for some reason. It looks sandy.”

Me: “Is this art to you and would you hang it on your wall?”

K: “I would appreciate it if it was in an exhibition but I wouldn’t choose to hang it up in my home.”

“The more I look at it, the more I like it. It looks like deep space, like the moon exploding. I don’t see a fish, where is the fish?”

CO and K: “Right there in the middle! How can you not see it?”

“Is it broken plaster work of some sort, fallen on marble? There was a pattern on a piece of the plaster, did it fall from a ceiling? It looks vaguely artistic.”

Me: “Would you hang it on your wall?”

PL: “Not in my house – but some people would have rooms this would go well in…it’s a discussion piece.”

“Somebody has dropped something onto a hard surface. Could have been a plate.”

Me: “Is it artistic? Would you have it in your house?”

KL: “No, it’s not really artistic is it? And no, I don’t think I would have it in my house. Is there a pair of smashed up glasses in this?

Me: “Glasses?” Um…no I don’t think there are any glasses.”

KL: “No, I wouldn’t have it in the house because of the risk of having it stolen.” (KL is renowned for his straight-faced sarcasm.)

Me: “If I told you that is a piece of art, what would you think?”

HM: “Well Gilly, I literally don’t know what to say. I can kind of see a picture. I can see a face. Now I can see it’s on the floor with broken bits around it. Did someone smash a plate on the floor? It’s really amazing – now I can see how the artist has pictured it. He’s had to work really hard on the pavement.”

Me: “Why not?” (Quite defensively – I mean I like this picture!)

HM: “Because it just looks like they’ve taken a picture of a smashed plate on the floor.”

Me: “Well what if I told you a piece of A4 paper, screwed up into a ball was considered to be art?” (See my previous post for details of that one?)

HM: “That would be just mind-blowing Gilly!”

HM: “Because no one in the world wants a piece of screwed up paper!”

HM: “Yes, that would make a massive difference.”

HM: “People could kick it around like a football.”

Me: “Well an artist is selling screwed up balls of paper online for £180.”

Me: “What is more artistic, a ball of screwed up paper by a famous artist or this smashed plate image?”

Me: “So would you hang it on your wall then?”

HM: “Because I don’t usually have to think that much.”

So there you have it – some very random, abstract views on this piece of abstract art.

It was really entertaining seeking views from people aged 4 to 90. We had everything from mundane reality to the moon exploding and a likeness to the ocean – oh yes, and sand. It is very clear that abstract art is not everyone’s cup of tea.

What is your take on abstract art – leave me  your thoughts below where it says leave a reply.

Crafter, tutor, tool-maker. writer, blogger and photographer living on the edge of the UK opposite Rotterdam. View all posts by Gilly →